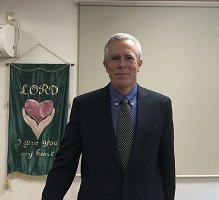 Today’s passage is a lot easier to understand if we look at the beginning of chapter 3.

A guy named Nicodemus came to visit Jesus at night, because he was amazed by the things Jesus did and wanted to know more.

He was a Pharisee, and a member of the Jewish ruling council.

In other words, he was a person of significant social standing.

And as a Pharisee and a member of the council, he was officially a member of powerful groups that were strongly opposed to all that Jesus was doing and saying.

So he came at night…

Now, regardless of how Jesus received him, I want to stress that Nicodemus was a good guy!

And he was willing to put political and religious controversy aside in the pursuit of truth.

And Jesus’ answers to his questions are really hard to understand.

Nicodemus was totally confused by Jesus’ words, and frankly, so am I.

But, it isn’t our place to try and figure out what Jesus was thinking…

What I find interesting is that the gospel editor felt this was a good time for some commentary.

A time to interject some clear explanations…

Although the original Greek text doesn’t have quotation marks, most translations show quotation marks thru v.15 and then from v.16 we are led to believe that these were words of commentary, written down by the editor of this gospel.

We don’t know for sure, but that is what most biblical scholars agree on.

Verses 16 and following are words of explanation so that we might not be as confused as Nicodemus was.

The thing is, Jesus wasn’t and still isn’t easy to explain.

A lot of the things we say about Jesus sound normal to us, but to someone outside of the church they sound very strange; even contradictory.

We say he was fully human and yet fully divine.

We say he knows everything we go thru since he was a human, and yet we say he never sinned, so how could he know what we go thru?

We say he died and we say he returned from the dead.

We say he left earth and returned to God, and yet we say he is here, in our midst.

We regularly say those things about Jesus in the church, but they would likely be just as confusing to a new-comer as were Jesus’ words to Nicodemus.

In today’s passage Jesus is calling Nicodemus to faith more than to some sort of intellectual knowledge.

But it comes out sounding really confusing to Nicodemus, and perhaps even to us.

Nicodemus wants to know who Jesus is.

Jesus wants Nicodemus to believe that he is sent from God.

Of course those two go hand in hand since no one believes in anything unless they have some basic knowledge that gives them reason to believe.

People heard Jesus’ words, saw his miraculous deeds, sensed his power and glory, and based on those things some of them chose to believe.

So we can’t completely separate the two; but I guess it’s a matter of which one gets the most emphasis.

Jesus was urging Nicodemus to focus on faith!

Of course, describing or explaining faith in Jesus is complicated too.

So in Jesus’ words and in the words of commentary that follow we have images that help us understand.

The images used to describe faith in Jesus vs unbelief are:
Eternal life vs. death
Salvation vs. condemnation
Light vs. darkness

All of these are figurative to some degree because they are human words trying to express divine truths.

We have become so accustomed to these terms and concepts in the church that we tend to think we know exactly what they mean.

We tend to think we can assign literal meanings to them.

But ultimately they are images.

So let’s take a brief look at them.

Eternal life: Of course we all die… but we believe in eternal life, so we explain it by saying that after our bodies die our spirits live on eternally.

But if you listen carefully to Jesus’ teachings it is clear that his use of the images of eternal life and death were by no means limited to what happens after we die.

Eternal life in Christ starts right now… and death is the same.

These images are used to describe what it is like walking in harmony with Christ or ignoring Christ in our daily lives.

Salvation: We also tend to spiritualize this… that we are saved from eternal punishment in hell when we believe in Jesus.

Or if we fail to believe then we are condemned to spent eternity in hell, being punished for our disbelief.

But in Jesus’ teaching there is very little mention of what happens to our souls after death.

He almost always talks about how we live our lives in the present.

That is why we have those fascinating words in v.18…
READ v.18

Those who don’t believe in Jesus are already condemned.

And what is their punishment?
READ v.19

Shying away from the light of Jesus that exposes all truth…

That lifestyle itself is the punishment!

And that brings us to the third image.

Light: This is the image of living our lives in the footsteps of Jesus.

Light that reveals the truth; both the good truth and the bad truth.

The light of Jesus reveals the truth about all of us.

We naturally choose to live in darkness; in hopes that the unseemly truths about us won’t be revealed.

We all have those things that we would rather keep hidden…

But when we walk in Christ’s path we welcome the truth; even when it hurts.

That is what it means to walk in the light.

In closing I want to look back at the words of Jesus in v.14.

The Hebrew people were on that long, long journey thru the wilderness.

They faced countless enemies, they faced hunger, they got lost, and yet the journey went on and on.

They were hoping and believing that God was leading them to the promised land but it was taking so much longer than anyone had ever expected.

And so they grew impatient and began to complain.
READ Numbers 21:5

Well, as the story goes, this complaining made God really angry.

The punishment from God was harsh!
READ v.6

The people were terrified, and quickly repented, asking for forgiveness.

Moses prayed on their behalf.

God heard Moses’ prayer and offered a path to life.

But it wasn’t just a magical, “sweep the problem away” sort of thing.

So they still faced the risk of dangerous and painful snake bites.

They still probably had swelling and fevers when they suffered snake bites.

But if they looked up at the bronze snake, believing God would save them, they didn’t die.

It required people to take their eyes off the immediate problem and look up!

That is how they were invited to acknowledge their wrongdoing in order to accept God’s gift of life.

Jesus Christ was also violently lifted up on the cross at the end of his time here on earth.

And that image of Jesus on the cross has become the single most distinct symbol of our faith.

For when we look up and see the image of our savior hung on the cross and killed, what we see there is the result of our sin…

We are invited to look upon that image and acknowledge our wrongdoing in order to accept God’s gift of life.

We are invited to place our faith in Jesus and change the way we live, so that the light of Christ may reveal truth in all that we do and say.

We are invited to believe in Jesus and receive the gift of life.

How will you respond?

Give glory to the LORD your Go…

“I will make you the everlasti…

You are not far from the kingd…