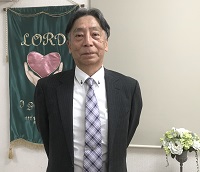 ↓Audio link to the sermon:(ZOOM worship recording)
(If you can’t listen on your iPhone, please update your iOS)

「“Meanwhile, the older son was in the field. When he came near the house, he heard music and dancing. So he called one of the servants and asked him what was going on. ‘Your brother has come,’ he replied, ‘and your father has killed the fattened calf because he has him back safe and sound.’ “The older brother became angry and refused to go in. So his father went out and pleaded with him. But he answered his father, ‘Look! All these years I’ve been slaving for you and never disobeyed your orders. Yet you never gave me even a young goat so I could celebrate with my friends. But when this son of yours who has squandered your property with prostitutes comes home, you kill the fattened calf for him!’ “ ‘My son,’ the father said, ‘you are always with me, and everything I have is yours. But we had to celebrate and be glad, because this brother of yours was dead and is alive again; he was lost and is found.’ ”」
‭‭Luke‬ ‭15:25-32‬ ‭NIV‬‬

① Today’s passage is from the second part of the parable of Jesus, “The Lost Sons”.

・ As you can see, the father in this story is our Creator, the Almighty God, and our Heavenly Father. On the other hand, the sons, both older and younger brother here, is us, ourselves.

・ In my previous message, we focused on the story of the younger son. Therefore, today we would like to focus on the older brother who will appear in the second half of this parable, which is from verse 25.

・ One day, the older brother finished his field work as usual and came home. However, the house seemed different from usual. He heard “music and dancing” from his house.

・ As it is written here “music and dancing”, What kind of music that you would imagine?

・Since it is music and dancing of celebration, many of you would probably imagine that it is kind of like a party atmosphere music with drinking.

・ However, the music at this time wasn’t like the dull music that are played in places like bars in our age.

・ There is a word translated as “music” here. In the original language, it is “symphonia”.
The word “symphonia” sounds familiar, doesn’t it?

・Yes, it means “sinfonia” in Italian, “symphony” in English, “symphonie” in German. In Japan, Ogai Mori translated this word into Japanese, “Ko-kyo-kyoku”, and it comes from this original word.

・Therefore, I imagine people with various, simple musical instruments at that time worked hard with one heart to resonate one song together. The sound was heard even outside. I would imagine the picture like that.

・Therefore, it seems that it wouldn’t be possible to make music unless you work together with one heart.

・ Every time I read this passage, I imagine people playing the simple instruments with one heart, singing, and dancing at their very best.

② Then, as the order brother heard this music, how did he respond to it?
He called one of the servants and asked him what was going on. “What in the world is the matter?”

・Even after he found out that his father and his servants were rejoicing while playing music, he didn’t want to come inside nor join them. He rather became extremely angry.

・The older brother had just returned from field work at this time, so I guess he was dressed for field work.
On the other hand, the younger brother who squandered their father’s property with prostitutes, he was wearing the best clothes with fine long sleeves that no one could ever wear.

・Not only that, he was even wearing the best shoes. On his finger, he was putting on a ring. This was a special ring proving that he was the son of an authoritative person.

・As we read the passage of this angry older brother, we might think like this,
“I guess Jesus wants to point out here the envy in the depths of the human heart …”

・ It is true that this older brother was very envious at this time. However, if we read this parable as a story just about envy and jealousy, then we cannot fully understand the message that Jesus wanted to communicate.

・What the older brother wanted to communicate was this,
“Father, think about this. I have been working by your side for many years with patience.
In these years, I have never had any time having fun with my friends. There was no wrong doing, I have always been righteous before you. But you have treated me like your servant or even less than a servant!“

・”On the other hand, my younger brother has been spending precious money on the prostitute, and for that reason he used up all the property he received from you. He has been living such an impure life. He is a sinner! And yet, you give him best clothes, footwear, and even a ring! Isn’t it unfair?”

③ When we hear such claim of this older brother, it’s easy for us to respond like this, “I understand his point. What he says is right! On the other hand, how impure and unholy this younger brother is!”

・However, let us pay more attention and ask ourselves this question, “Are there any righteous people like this older brother who has nothing to do with sin, and completely righteous? Do such people really exist?”

・I wonder if he really was an innocent and righteous person as he claimed to be.

・ Surely, he was a hardworking person who had been behaving well in front of his father for a long time. Therefore, he and the people around him believed that his way of life seemed to be an ideal way, and it came from his love for his father.

・On the other hand, the father did not classify like “the younger brother is a sinner and the older brother is righteous”. It was because He knows there’s no one righteous, not even one. This father saw his sons with the same love.

・ There was a gap between the perspectives of this father and the older brother here.

・ However, the time had come when the truth was about to be revealed, what was really in the older brother’s heart. His younger brother came home. And from inside the house, he heard the music played by the servants …And he even saw his father rejoicing.

・At this point, his nature started being revealed.

④ By the way, this parable has been called “The Prodigal Son” for a long time.
But I don’t think this title is appropriate for this parable, and I’m not the only one who thinks like that.

・It is because the title “The Prodigal Son” could lead us into a serious misunderstanding.

・ In other words, all of them are parables about the lost things returning to God, and He rejoices over their return. Therefore, they are sort of like “The Trilogy of Lost Parables”.

・Even so, if you call this parable “The Prodigal Son”, it will lead us to this kind of misunderstanding.

・ Prodigal means spending money unwisely on alcohol or on women, and living immorally, so many of us instantly think the third parable is about the younger brother.

・As we read about this older brother, he had nothing to do with drinking nor womanizing, so we tend to think his story is just a sideshow, which is very unfortunate.

・In the first place, the father was desperately searching for his younger son, not because he knew that his son was having degenerate life. Even if his younger son succeeded in the business and became rich and famous, he must have continued to search for his lost son in the same way.

・The father rejoiced not because his lost son gave up on prodigal way of living. He rejoiced over his lost son coming back to him and start living with him.

・ However, if we read this passage as “The Prodigal Son”, many people misunderstand that, “This story is about the mistake of the younger brother. We have to live a decent life, giving up on a prodigal way of living. That is the point of this story.” There is a possibility that the gospel will be replaced by moral advise.

・This is the reason why I don’t read this passage as “The Prodigal Son”, but I read this parable as “The Lost Sons”.

・”The Lost Sons” means sons who lost their identity as children of their father. Then, who are the lost sons?

・As you have already noticed, the parable of “The Lost Sons” are about not only the younger son who returned after being prodigal, but the older son, who was also lost.

・ But with the return of his younger brother, he was also able to return to his father. That brought the greatest joy to their father. This is the big picture of this parable.

・As you see this big picture, you will be able to receive God’s message of love.

⑤ Which of these brothers do you see yourself in?

・ I have been working as a pastor for about 40 years. Surprisingly, there are not many
“Typical sinner” like this younger brother who came to know they are sinner at the lowest bottom.

・Rather, most of them have been such nice people, so they didn’t have opportunity to recognize their sin inside. However, as they experience the loving fellowship in the church, they will be able to see their heart honestly, and finally come to recognize their sin. I feel that such cases are more common.

・I believe you can also relate to the older brother since you are probably hard-working, earnest people. I see myself in this older brother as well.

⑥ Lastly, we would like to pay attention to the words that the father spoke to the older son. As he started getting angry, his father pleaded with him and said,

・ For the first time in his life, he came to know his father’s heart.

・Without the return of his younger brother, he would never recognize his envious heart, he kept behaving like a decent man, and even believed himself as a good person… Even though he was physically close to his father, he would never know his father’s heart, and end his life leaving everything uncertain.

・But now, he knows that his father is with him and everything the father has is his own.
In other words, he knew that he was in the midst of God’s grace.

・Finally, he was able to know his identity as the son of his father. He was once lost but now, he truly became the son who shares his life with his father.

⑦ A theologian says something like this. “Surely, he didn’t know his father’s love …
However, that was just not known to him as his consciousness.”

“On a deep psychological level, he knew that he is loved by his father in his unconsciousness.”

・That might be true. I’m not sure about his deep psyche since I’m not a specialist,
but from his angry response, we can almost hear the cry of his heart.

・By expressing his deep cry and the response of his father, he was able to be free from the pressure to be good from this day.

・We also want to be secure, knowing that we are his sons and daughters, as his children wearing the ring of our heavenly father, let us love our neighbors as we love ourselves this week.

“When he came to his senses,”