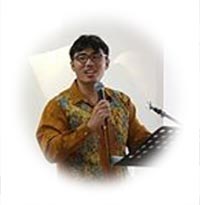 In today’s sermon, we get a small glimpse of Jesus’s earthly family. And we’ll hear Jesus start to talk about his wider, global family. We’ll read three short passages from Mark’s Gospel chapter 3. The first passage is verses 7 to 12.

Here we see Jesus’ popularity skyrocket. Not just among people from Jewish lands like Galilee, Judea, and Jerusalem but also from non-Jewish lands like Idumea, Jordan, Tyre, and Sidon. In later chapters we see Jesus reaching out not just to his own Jewish people but to other races, even the enemies of the Jews.

At this stage, most people are probably not as interested in Jesus’s teachings than what he can do for them. Even so, Jesus does not reprimand them.

But while the people may not recognize who Jesus really is, demons do. Verse 11 says: Just at the sight of Jesus, demons fell prostrate and acknowledged his authority. “You are the Son of God!” they cried out. Jesus continues to conquer the kingdom of Satan in our world.

Jesus went up a mountain and appointed twelve men who would be his closest disciples. Twelve on the mountain is no coincidence. This parallels the historic event when Moses went up Mount Sinai and received God’s laws—which some call the Mosaic Covenant—then taught it to the twelve tribes of Israel. By appointing twelve disciples, Jesus is establishing a new spiritual leadership for a new Israel. Later, Jesus would fulfil a new covenant between God and Israel by his death on the cross.

How were these twelve disciples going to lead? First, they had to begin their journey by spending time with Jesus, to simply be with him. In verse 14, Jesus sums up their role in two phrases: “to be with him” and that he might “send them out”.

In John 15:4-7 Jesus describes himself as a vine, like a grapevine. He called his disciples the branches. If a branch is disconnected from the vine, it cannot bear fruit. Likewise, if the disciples did not really know Jesus closely, they could not effectively produce the kind of fruit God desires. Only by knowing him first-hand could they be “sent out”.

Jesus “sent out” these disciples on the same mission that God sent him on. That is: to preach about the kingdom of God through their words and to demonstrate its reality through their actions.

These twelve men are later known as the twelve “apostles”. The Greek word for apostle means “one who is sent out,” like an envoy who is authorized to represent a king. As envoys, their message was: The kingdom of God is near, so repent and believe.

Here we have a story about Jesus’ family. They didn’t approve of what he was doing. Verse 21 says his family came to “take charge” of Jesus (NIV). Another translation says they came to “seize him” (ESV).

Jesus’ relatives were worried about him, and they had many good reasons. Firstly, he was so busy he didn’t have time to eat that day. Secondly, while he was becoming popular with the common people, he was also attracting suspicion and hostility from religious authorities. Maybe Jesus’ relatives thought he should return to his quiet trade of being a carpenter, instead of being a controversial teacher and healer.

Verse 21 also records this: “for they said, ‘He is out of his mind’”. We’re not sure if Jesus’ family said this, or if they heard these words from other people. Regardless, in Jesus’ time, people often believed that being “out of your mind”—that is, having mental illness or acting strangely—was a sign of demonic influence.

So, it is not surprising that in verse 22 the scribes accused him of being controlled by demons. The scribes were perhaps a group of religious experts, sent by Jerusalem to assess Jesus’ ministry of healing and teaching.

Anyway, this is their assessment of Jesus: “Yes, he has power to cast out demons, but this power comes from Beelzebul, not God!” Beelzebul is another name for Satan.

To that, Jesus replied: “Why would Satan use his own demons to defeat each other?” Civil war only weakens a kingdom, not strengthen it.

Then Jesus describes himself as Satan’s opponent. Satan is like a strong man, and he controls or owns many people. Jesus came to break into Satan’s territory and bind him so that those people can be set free.

Finally, Jesus talks about blasphemy against the Holy Spirit. What does it mean to blaspheme against the Holy Spirit? One commentator says: It is to harden your heart so completely until you refuse to recognize God’s actions. So far, the scribes had failed to assess Jesus correctly. They looked at him and saw signs of the Devil instead of signs of God. So Jesus was warning them to be careful.

If blasphemy against the Spirit means continually rejecting him, then we can understand why this sin will never be forgiven. It’s not because God lacks enough compassion to forgive. Rather, the person who rejects God does not receive forgiveness because they do not want forgiveness or think they need forgiveness.

In verses 31-35, we return to the topic of Jesus’ family. Mary, Jesus’ mother, is mentioned here for the first time in Mark’s Gospel. She had heard God’s message about Jesus through the angel Gabriel, but she still does not fully comprehend her son’s actions and his mission.

What Jesus has come to do? To establish a new family that goes beyond blood ties. As Jesus says in verse 35, “Whoever does God’s will is my brother and sister and mother.” So, followers of Jesus have a biological family, but also a spiritual family.

This is not an excuse to neglect our families or their feelings or our health. If we claim that God is our king, we will also take care of our families and our health—because these are gifts and responsibilities from God. At the same time, we listen most of all to God, the head of all families. And that is what Jesus did: he made sure to obey the voice of his heavenly Father in the times it conflicted with the voice of his human family.

Before I conclude today’s message, here are 3 questions to ask ourselves about being in the family of God.

Second, how should a member of Jesus’ family live? As Jesus says, “Whoever does God’s will is my brother and sister and mother.” In the context of this passage, doing the will of God is to listen, believe, and act on Jesus’ message rather than to harden our hearts.

Finally, are we prepared to be misunderstood by people who don’t follow Jesus? At times, being a member of Jesus’ family could cause you to be accused as fanatical, illogical, bigoted, and so on.

During my mother’s funeral this summer, I said that I would refrain from participating in a few of the Buddhist rituals. For example, instead of offering incense on the joss stick, I would simply give a bow of respect. Because of that, some relatives were not happy. I was seen as not doing my duty as a son.

One of my relatives tried to explain that offering incense was not a religious act, just a symbol of filial piety and respect. I tried to explain that if it were only a symbol of respect, then we could show respect in other ways, like offering flowers. But there actually is a religious meaning—a very important one—behind offering the joss stick of incense. In the Buddhist worldview, it symbolizes transferring your merit to the deceased. By offering incense, I’m declaring that my mother needs this merit. Without enough merit, the deceased cannot cross over properly to the afterlife and instead becomes a hungry ghost (餓鬼) who has no peace. So, there is an important meaning behind the offering of incense at funerals, just as there is meaning behind our Christian rituals. At Christian funerals, we don’t ask non-Christians to sing or pray. We do not expect non-Christians in church to take Holy Communion or to be baptized since they don’t yet believe in these things.

Anyway, it was frustrating to be misunderstood by some people. But God knows that I love my mother, and that is enough for me.

I’m also grateful for a few things during that time. My older brother stood by me in not joining certain rituals. My father respected our decision. He even gave me a time slot to have a Christian memorial service. My home church supported us in practical ways that I believe were meaningful to my father and brother. I hope they saw not only a demonstration of the truth but also the love of God through my spiritual family.

Some day, you too may face opposition for your commitment to Christ. I take comfort from Jesus’ words from Mark 10:29-30: “Truly, I say to you, there is no one who has left house or brothers or sisters or mother or father or children or lands, for my sake and for the gospel, who will not receive a hundredfold now in this time, . . . with persecutions, and in the age to come eternal life.”

I see the proof of his words in my own life. I now have many fathers, mothers, and siblings in the family of God. As for my biological family, I am called to love them and entrust them to God’s hands.

Let me end by summarizing today’s passage. Jesus came to end Satan’s kingdom and inaugurate God’s kingdom. He calls us into spiritual freedom and a spiritual family. As members of his family, we may be misunderstood by other people. That can be very painful, but may God help us do what is right and to love those who don’t understand our faith. Let us pray.

”neither do I condemn you” (Jo…

The God of All Comfort (2 Cori…

“Let any one of you who is wit…

“Who are your own Samaritans?”…

The fragrance of Christ (John …